Mother and daughter team up to mock illustration 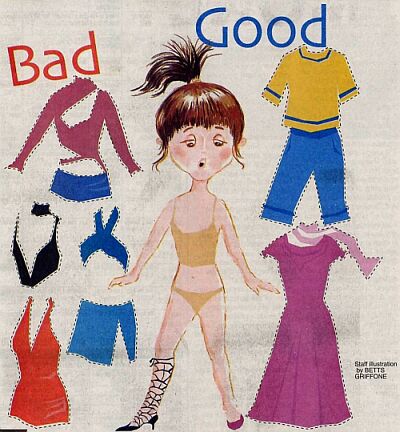 My mother sent me this picture from an article in the San Bernardino Sun with the headline A Little Modesty, Please! ("Stylish, in -- skimpy, out: Mothers and daughters team up to advocate clothes that cover at a fashion show in March").

From her note: "Thought you might like this for your 'fridge just in case you or your friends are not sure how to dress if you want to be a BAD girl or a GOOD girl!!"

She's fabulous, my mother, and not just because she never made me attach a scarf to my prom dress.

What is so wonderful about this is that it demonstrates exactly how stupid the initiative process has become. At least I-831 isnt regressive and short-sighted.

Im also voting yes on I-832: Let it be resolved that the Washington State Legislature is full of gutless, ineffectual pansies who would rather let the state infrastructure rot away than risk not getting re-elected.

:: link ::
Early one morning Jane opened the gate and went out into the big, green meadow

I was walking home tonight after dropping my friend off at the bus stop, and I couldnt get a certain bouncy little tune out of my head. Just when I was getting irritated with my inability to place it, I looked up and saw a marquee advertising a matinee of Profkofievs Peter and the Wolf.

...except that I walked past the theatre this morning. I cant say I specifically noticed the marquee, but that sucker must have been simmering in my brain pan all day.

The bus driver pulls up to a stop and opens the door. A voice outside says, "How are you doing?" to the driver, who answers, "All right, thanks."

The voice, and its still just a voice because its owner hasnt stepped into the bus, says, "Whats your ID number?" The driver rattles off a number, and the voice proceeds to tell the driver that he wasnt supposed to stop there, and didnt he check the re-route list? The driver says he did, but must have missed it. His tone is careful - he knows hes in trouble but there isnt much he can do about it, and is just trying to minimize this particular reaming.

The owner of the voice must have waved the driver on, because he closes the door and heads out. There is a tense and sympathetic silence among the passengers.

Im wondering what its like to be the guy whose job it is to stand at a temporarily defunct bus stop and bitch out any driver careless enough to stop, and how youd fit that on a résumé.

Jessica has a lemur purse. Its a lemur, and its a purse. Its not a formerly living and breathing lemur, but a cunning representation of a lemur, with plastic orangey amber eyes and paws and a zipper down its back.

It is, like its owner, incredibly cool. In her honor, I declare this Lemur Day.

I plan to celebrate by spending time in trees, or at least furniture made out of trees, and opening my eyes really wide at strategic times throughout the day.

Ive spent maybe two hours tops editing my novel since I finished the first draft on November 30th. Sure, I rewrote the first sentence (now its "The hall sounds like an oddly festive field of battle, or an especially brutish party, depending on the time of day"), and I added a paragraph here and there, but mostly Ive been avoiding the whole exercise.

Today I got an e-mail from the good folks at NaNoWriMo bringing this to my attention. It is ideal. I am saved.

And then I thought about the implications of relying on Internet-driven competitions to complete the difficult and/or unpleasant tasks we all put off. Whats next? NaOiChaMo? NaPaSmeMo?

Okay, actually, that would probably work for me. Where do I register?

You should go play at the San Francisco Symphony Kid's Site.

Finally I figured out it was because I wanted an excuse to refer to Ben Affleck as The Fleck.

Speaking of flecks, here is something unsettling involving a crab.

:: link ::
Okay, Not So Much a Bath as a Sensory Deprivation Chamber

Eric and I have just seen Daredevil.

Hes a kidder, that Eric.

That Christmas song about Snoopy and the Red Baron was playing at the little convenience-store-type-place in my office building.

Could someone please explain why, because really, you know, its February.

Its Saturday. Im in line at the grocery store. The top of my basket is covered with bags of frozen fruit, mostly strawberries. The woman in front of me is looking cheerfully at my basket, and at me. I smile back, because Im not feeling as hey-lady-mind-yer-own-business as usual. Which means conversation is just seconds away. Three...two...one...

HER: You must be making pie!
ME: Uh, no. Nothing that wholesome.

Okay, not so much interested as worried. She looks downright concerned for the strawberries, as if they must be destined for use in something truly unseemly. Clearly by "nothing that wholesome" I am referring to an underground fruit-intensive sex ritual.

Maybe its not too late to say "Valentines Day is just around the corner!" after all. But Im not in the mood to be that wicked, so instead I confess.

ME: Daiquiris. Im making daiquiris. For a party.
HER: Oh.

:: link ::
Its the Most Wonderful Time of the Year

I was not exposed to Les Schwab Tire Centers and their annual Free Beef promotion until I moved to Eugene, Oregon, and then I was exposed a lot. TV, radio, print  were talking total market saturation here, people.

Its that time of the year again ("February Is Free Beef Time!"), and I like to celebrate the season by taking a moment to think about the bike shop in Eugene that ran Free Tofu ads. They were funny.

Today I am still thinking about this unreliable memory thing.

First, a warning in the form of a spoiler: my favorite part of Mulholland Drive is the sequence in Club Silencio. The emcee tells the audience (in the film and of the film), "No hay banda" - there is no band. Then Rebekah Del Rio comes out and sings a capella and in Spanish Roy Orbison's "Crying". Its beautiful. Its heart-breaking. Its completely absorbing. The movies lead characters, sitting in the audience, cry. I cried, too.

And then Del Rio suddenly collapses, but the recorded music goes on. Its not real. There is no band. We were warned.

Heres what I wrote on Saturday afternoon:

When I was in fourth grade, if youd asked me what I wanted to do when I grew up, I would have said, "Go to Cal Tech and work at JPL." I would have given the same answer up through the first semester of eleventh grade, when I discovered that trigonometry and I dont get along.

But in fourth grade, I didnt know that one day even the word "cosine" would give me a headache. I did know that the Voyager space probes had just sent back pictures of Saturn, and they were beautiful, like the stars over our desert suburb. I knew the names of the stars, mostly Arabic-based, and the names of the constellations, with their Greek or Latin.

Columbias first landing, the first landing of any space shuttle mission, happened not far from my familys house, at Edwards Air Force Base, in 1981. I wasnt there, but my brother was, and he came home with a bright green bumper sticker with a line drawing of Columbia and the words I SAW IT LAND! He stuck it to the door to his bedroom, where I saw it nearly every day for ten years. Its still there. I see it when I go home for Christmas.

On January 28, 1986, when I was in a fourth grade classroom, the school secretary came in and spoke softly to our teacher, who then spoke softly to us. We had a TV in the classroom, and I remember Mrs. Hurd struggling to switch to a broadcast instead of the bulky new VCR, and then trying to get the clearest station. She found one, and we sat in silence as we watched Challenger explode, again and again and again.

Years ago, well before September 11, 2001, I was at party where someone was talking about how nearly everyone of his generation knew exactly where they were when they found out John F. Kennedy was assassinated, and said that he didnt think there was an equivalent for my generation. Three of us looked at each other and said, "Challenger."

Today I woke up late, went into the kitchen to make coffee, and turned on the radio. I didnt hear what I expected - instead, I heard an interview with someone at NASA. The speaker was asking about the culture among the scientists there, whether they still felt or openly expressed the excitement about and fascination with space that brought them to this career, excitement and fascination that usually went back to childhood.

My first thought was that is must be a holiday - the last time I heard programming pre-empted this way was on a holiday. Then the next interview started, and I understood what had happened.

As soon as I re-read what Id written, I realized something was wrong. It didnt take much math (arithmetic, not trig) to recognize that I wasnt in fourth grade in 1986 - I was in ninth grade.

Still, I couldnt shake the vividness of the memory, but I also couldnt make it fit together. Voyager really was sending back pictures of Saturn when I was in fourth grade, but that was 1980-1981.

It was both disappointing and a relief to realize I must have been thinking of how I found out about the attempted assassination of Ronald Reagan in 1981, the year Columbia flew its first mission.

I may have been wrong about where I first heard about Challenger - with the interference of the other memory cleared up, I'm reasonably sure it was when I came home from school that afternoon - but I do remember the footage of the explosion, and its relentless repetition.

Generally Im not someone who participates in displays of mourning about events in the news. Id kicked around the idea of starting a weblog the summer of 2001, but I put it off because after 9/11 I knew there would be only one thing to write about. I didnt think I had anything to say that hadnt already been said; I didn't think I felt anything that wasn't already a part of everyone.

So I'm a little surprised that I feel compelled to write about Columbia, to confess that on Saturday I found myself crying in my kitchen when I heard the news, and crying as I wrote about a memory that turned out to be less grounded than I'd imagined.