I'm trying really hard to wire a couple of brain cells together, but instead of an entry-producing spark all I get is a wisp of greasy smoke. Bleh.

In the meantime, a band that could be The Divorce or Blue Sky Mile or Mindhead is pouring through the window, competing energetically with the sound of traffic and noisy Thursday night drunks, who are qualitatively different from Friday and Saturday drunks (Thursdays are more evenly pitched, with less desperate hilarity). I only know the names of the bands because I googled the Croc's schedule, out of curiosity. Whoever they are , they sound moody as all git out. I know, shocking.

This weekend in a fit of nostalgia I bought a box of Otter - okay, is it Otter Pops? Or Otterpops?

[One trip to the freezer later...]

Okay, looks like the correct spelling is Otter*Pops - the asterisk appears to be mandatory. Also, Louie-Bloo Raspberry assures me they are "Original", and while the package is convincingly retro and has all the bright goofiness I remember, I sincerely hope the contents are more contemporary.

My favorite thing about Otter*Pops (other than the names of the flavors, which reel madly between pun and non sequitor), is imagining the moment they were invented:

HEAD OF MARKETING: Gentleman, the market is wide open for a delicious fast freeze ice bar. R&D has already engineered seven zippy flavors, six of which are safe for human consumption. Now it's up to us - what do we call them?

MARKETING GUY: How about "Freez-R-Pops"?

ANOTHER MARKETING GUY: Could Toys-R-Us sue us?

MG: Not if we keep the R facing the right way in the logo.

HOM: It's too obvious, and besides, we need a merchandizing tie-in. We need cute characters -

HOM: No, we need warm and fuzzy animals.

HOM: Yes, something along those lines...

HOM: Close...only more comical and less likely to chew your face off if given half a chance.

HOM: Say, that's not bad. But it's still missing something...

MG: What if put an asterisk between "Otter" and "Pop"?

I totally would have bought Supreme Court Pops.

Sometimes a small event can trigger a big decision, and I swear it makes an actual sound in the brain, like "click" or "ping".

:: link ::
Transportation Solutions for the Gal on the Go

Before I add a smaller version of this picture to the regular rotation at the upper left, I must introduce it in its full-sized glory: 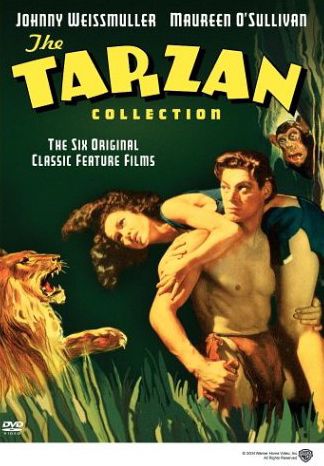 And here is why I love it so very much:

1) I don't know what Tarzan thinks he's doing, but clearly he's just a well-coiffed Man-Taxi ("Fourth and Vine," says Jane, "and step on it!")

2) The look of irritation on Jane's face is wonderfully all-purpose. Is she annoyed that her Man-Taxi is taking the long way through the jungle, or that his loin cloth didn't have enough room for all her luggage? Or is that tailgating lion getting on her nerves?

3) Cheetah appears to be smoking something back there, and I like to think it's the wacky tobacky.

I finished off Nicholas Nickleby on Saturday - I'd been working on it for over two months now, but I only committed my full attention to it a few weeks ago, when I realized that if I kept putting it down in favor of other things it would take a year to get through it. Around page 600 (with 350 pages to go) I became anxious to finish it, but I was also enjoying myself...it was funny, and rewarding, and I certainly didn't want to give it up, but as an exclusive relationship it was getting a little, well, monotonous (I did take this novel, to have and to read, in sickness and in health and forsaking all others as long as the chapters shall last).

In contrast, Chuck Palahniuk's Lullaby was a one-night - or rather, one-day - stand: started over Sunday's breakfast and finished before dinner, even while being dropped periodically throughout the day for errands or the pesky, aforementioned work. Like a good one-night stand it was intense, and visceral, and felt like the inside of a movie.

The strange thing was that I picked up Nicholas Nickleby out of habit tonight, and wound up reading the appendices. Turns out I miss it.

But I'm still not getting anywhere near Little Dorrit.

Oh, yes - it was inevitable.

And be sure to check out the FAQs and the media page.

When I picked up my mail yesterday I found an envelope from my company, and my first thought was, "Maybe it's a pink slip!"

(I know pink slips aren't usually mailed to one's home address, but the fact that I was excited and hopeful at the prospect should tell you something about my state of mind.)

I didn't have to tear the envelope open very far before I found a picture of Snoopy.

They were trying to sell me insurance. Good grief.

Like so many other cube dwellers, I'm a slave to Outlook, and today I noticed that my calendar looks like a poorly played game of Tetris when somebody tried to wedge an "L" into Wednesday and Thursday.

Maybe if I rotate it 90 degrees across Wednesday, Thursday, and Friday. . .

I'm upgrading the condition of my voice from "Patty / Selma" to "Kathleen Turner".

Alrighty, so it is not 4:00 a.m. - in fact, it's barely a.m. at all, which is good because I'm on Day 6 of a That's-What-You-Get-for-Running-Yourself-Down Cold. I'm beyond the phase where I have to rest up after a few minutes of normal exertion (I called in sick to work Thursday and Friday because brushing my teeth made me dizzy). Now I'm in the phase where I feel better, but sound worse. I sound like I've been smoking constantly since the age of six.

[Insert visual of towheaded first-grader in pigtails taking a drag and croaking, "Be a dear and pick up up those jacks for me, thanks, sweetness, you're a doll."]

Which reminds me of some unfinished business. . .

Confidential to Professor B in OR: Bronchitis did not make me sound sexy, and you were an idiot for saying so. I would have told you at the time, but I cared about my GPA.

And now back to my regularly scheduled coughing fit.

As of four o'clock (of course in the morning) I've got the changes to the other site ready in test, but it seems unwise to make them live at this hour, what with the sleepiness and the blurred vision and all.

I bought pirate action figures on Sunday, though, so I can cross one thing off my list.