I'm in a mucky internal reflection phase*, and this thought keeps popping into my head like an involuntary mantra: "Just because I know the words doesn't mean I have to sing the song."

Once it was even literal, so there you go.

* I expect to shake the phase any minute...now. No, wait...now! Nnnnnnnnnnnnnn...now! Dammit! Stupid introspection. Don't make me kill you with television, because I swear, I'll do it.

Expect to see this link everywhere, because it is just that good.

Including the Peter Gabriel track, it's just...can't speak. Too much genius.

It's a gray rainy day here in Seattle, the perfect weather for an elegy.

I found out several months ago that Drizzle, my local ISP with the kick-ass customer service, had been sold to another company. For weeks there was no discernible difference, and when the first change finally happened, it was a good one -- they increased storage space.

The next change was not so good, but I understood it -- they took away quarterly and semi-annual pricing, and left only monthly and annual. I liked semi-annual: cheaper rate, but not such a hit to the credit card statement.

But I'm lazy, so I didn't immediately jump ship at a minor inconvenience. Of course, now that my e-mail's down -- along with webmail and my shell account -- I think it's time to bail out.

I went poking around and found this exercise in nostalgia, a list of local ISPs in Seattle from 1999. It looks like there are still a couple of good choices among the survivors.

Anybody have recommendations or warnings?

The driver on my bus home tonight looked just like Bruce Campbell, except I could tell he was the evil twin because he had the goatee.

The similarity wasn't just in the facial features -- he had the expressions, too. The eyebrow held in the arched position at least 30% of the time. The determined set of the jaw. The weary look in the eyes that said, "Hey I'm just driving a bus -- I don't need any weirdness from zombies / primitive screwheads / the chick in the pirate t-shirt who keeps staring at my reflection in the rearview mirror."

One of the preschool-aged neighbor kids is in the Big Trucks Are the Best Thing EVER!! stage. S noticed this when she went out to the car and saw him following the recycling guy from house to house. She said the recycling guy was just grinning the whole time he was being trailed by his cute little fan. Because we are the shameless owners of a digital camera, and because we've had such fun with Seattle utilities folks before, we have a picture: 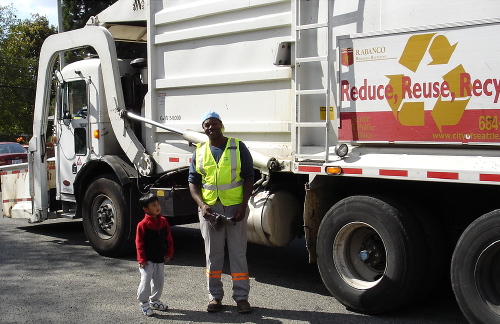 I think I neglected to post the nifty bit of news that I sold my first short story last month, so instead I will announce that my first publishing contract arrived in the mail today.

The word Author is in it ten times, and each time it refers to me.

So today is the Talk Like a Pirate equivalent of Boxing Day, or -- as I like to think of it -- Box Like a Pirate Day. Less chat, more brawling, people.

I was busy traveling yesterday ("Yarrrr, lad -- ye call these peanuts honey-roasted, do ye?"), but I did get to spend the evening sporting my fabulous new t-shirt* from San Francisco's very own pirate store. My only complaint is that they won't let you try on the glass eyes before you buy them.

And now, in the belief that every day should be full of piratey goodness, here are a couple of my favorite pirate links, and Defective Yeti's classic Ergonomic Keyboard for Pirates.

*A note for those champions of scurvy prevention, our neighbors K and J: wanna have a Holly Jolly Roger Christmas?

The previous entry gives me an excuse to post this picture of my dad wearing his dad's racing helmet: 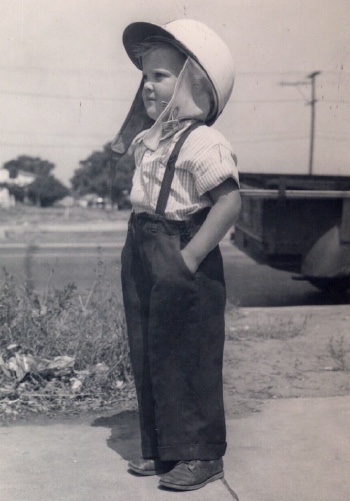 Back in July I was on my way out of the UW Bookstore when I noticed a few copies of The Best of Hot Rod Magazine, 1949-1959 on display. On a whim I picked up a copy, turned to L in the index, and found Lindsley, Jim and below it Lindsley, Phyllis. I flipped to the page and found this: 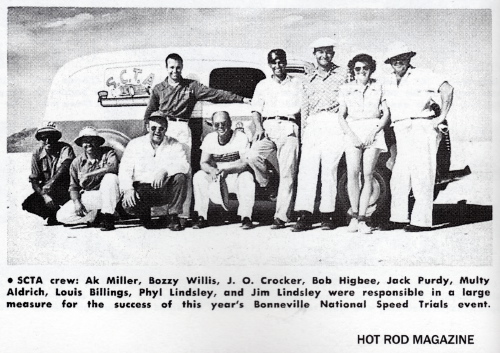 Yep, that's my grandmother and grandfather on the far right. And yep, I bought the book. I took it back to the Science Fiction Sorority House, alternately grinning and sniffling. My grandfather's funeral was only three months before, and even though she's been gone twenty years I still remember and miss my grandmother. Plus, she looks damn cute in those shorts.

The funny thing is that only the picture was referenced in the book's index, but on Amazon there are a few more, and in fact -- in the scary way of revved up search engines -- there are references to my grandparents in several other books, including one that has this picture: 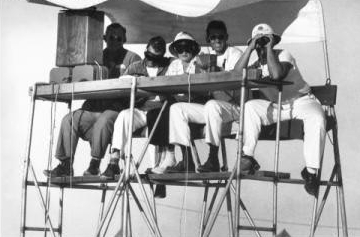 If the hat hasn't already clued you in, my grandfather is the one behind the binoculars.

In the same book I found a section called Women Tried but Were Denied:

The SCTA was still in the Neanderthal stage of its existence when it came to women drivers, and forbade them from competing. Ak Miller explained the reason for this prejudice: "If a woman was ever killed, or maimed in a car, it could spell disaster for the entire sport. In those days, the men were terrified that if a woman was hurt, or worse, killed, and left behind children, the sport might never recover from the bad publicity."

Naturally, no one mentioned how seriously bunched up the hot rodder's BVDs would have been had they been beaten by a girl. Over time, women were issued competition licenses, but only after a protracted, puddin-head battle.

Jim Lindsley's wife, Phyllis, was a stalwart and much-admired volunteer for the SCTA in the early days, but her involvement was limited to traditional clerical and administration tasks. Once, though only because of her tremendous volunteerism, the men allowed her to make one run, probably the first by a woman.

Next weekend my grandmother will be inducted the Dry Lakes Hall of Fame, joining my grandfather.

Gak! No, that's not right -- I'm looking for more of a hacking noise: Ghak! maybe. Or Gakh! Yeah, that's it: Gakh!! Where did the time go?!! It's not like I've been wasting it (well, okay, The Brothers Grimm wasn't the best way to spend two hours, but I'm sure my faith in Terry Gilliam will be restored with a director's cut that, um, well, makes it not a near-complete freakin' mess).

I have been chipping away at the to-do list. The resume's done and ready for firing off; I have two stories in the mail; I've done several long-hand critiques and I'll be typing those up later today, and I received a couple of critiques that gave me Bright Ideas. None of this makes the fact that it's already the middle of September in any way acceptable to me.

Oh, and J's birthday party theme this year is Cocktail Caravan: Journey to an Oasis, which means I'll be spending every free moment until October 1st doing abdominal crunches.

S and I were watching late-night TV when an ad featuring the URL www.sinflorder.com came on. Oblivious to all the football images and shouting about Sports Illustrated going on in the background I asked, "What's a Sin Florder?"

Yeah, I know: not exactly a triumphant return after two week's absence, but I'm supposed to be working on my resume right now.