More "Jodie Foster!" Than an Asylum Full of Hinkleys

I saw A Very Long Engagement last night, and if you go see it, I have a recommendation:

Just before it starts, stand up and tell your fellow audience members, "Jodie Foster is in this movie!! Yes, that's her! That is Jodie Foster! Speaking French! So now you don't have to keep asking the person next to you if that's Jodie Foster, because it is!!"

Trust me, it'll save you a lot of heartache about an hour in.

I'm leaning against a fence in a Wyeth landscape, standing next to an old friend who is exceedingly unlikely to smoke crack.

MY FRIEND: So what's new with you?

ME: My book got published.

ME: Yeah. How about you?

Vincent Gallo, dressed as in Buffalo '66, walks by.

VOICE OF GOD FROM ON HIGH: No kidding. Did you see The Brown Bunny?

ME: I hate it when He does that.

In the shower this morning I noticed that my shampoo (specially formulated to protect my color-treated hair, dontcha know) had the following written on the back of the bottle:

Colorful reminder: when your color shines, so do you.

Well, strictly speaking I don't shine, I glow. Probably because the shampoo's fifth ingredient -- right after ammonium lauryl sulfate and before glycol distearate -- is radium.

I've got to quit just buying whatever's on sale.

I had a good writing day! Hell, I had a good everything day. Which is kinda boring, really, so let's go back to yesterday, when I came around a corner in my apartment and face to face with a full-length mirror hanging on a door. The door was open at an angle I rarely encounter, so instead of immediately registering my own reflection, I had a massive fight-or-flight adrenaline reaction to the apparent intruder walking toward me.

I caught my breath, and on my way past the mirror I had to stop and look at myself just to say, "Who's a stupid birdie?"

:: link ::
Actually, the Title of the Previous Entry Is a Lie

My favorite key is [Control], especially when paired with [Z]. It's like small-scale time travel.

I love arbitrary symbols of change: birthdays, an odometer rolling over, a new calendar.

January is so damn bracing!

I have the cleaning bug lately (some of you will read that as code for "writer's block" and, well, yeah), and while it hasn't extended to doing anything about several high and tottering stacks of video tapes, it did get into the dusty depths of what I grudgingly think of as my manicure bag (and only because "nail clipper / emery board / hey didn't I used to have an orange stick? bag" takes too long to think).

The bag in question is, in fact, one of those little LeSportsac clutches, given to me in 1989 by my journalism teacher back in high school. I think it was supposed to carry pens and such, but for the last fifteen years it's served a less noble purpose, most notably providing shelter for a bottle of "Nails for Males" in its rarely-opened zippered front pocket.

"Nails for Males" (and good lord, someone is still making it) is a low-gloss polish I acquired from my aunt maybe ten or twelve years ago, mostly for the giggle factor. I'd forgotten I had it until last month, when the bottle sprung a leak, probably for the attention. I just tossed the bottle without bothering to check out the rest of the contents of the front pocket, so it wasn't until my cleaning fit last night that I found a yellowed and haphazardly folded bit of newsprint pinned down by an (oh, there it is) orange stick.

I opened it up to discover "Fraiser was the network's only new show to crack the top ten last season," and figured the reason it was in my bag must be on the other side. Here is what I found:

SAN BERNARDINO - The Inland Empire Symphony Association is looking for young women who served previously as debutantes for the symphony to participate in a survey.

The deb alumnae should send name, current or permanent address, phone number, and name of school to [name and address of someone with Audience Development for the Inland Empire Symphony Association].

That's right, the skeleton in my closet is wearing a white gown...but it was off the rack, and at $90 was easily the most expensive hunk of fabric I owned at the time. In San Bernardino, at least, the word "deb" is not necessarily synonymous with "money".

I joined up to add a little "heylookame!" to my college applications, and also because I liked classical music even back then, and the debs got to attend concerts for free. Clearly I neglected to factor in the dress, which brought the deal closer to breaking even.

Sadly, the Inland Empire Symphony Debs have no real internet presence, so I'll have to call on our sisters in Richardson, Texas:

All Debutantes must arrive neatly groomed with hair combed and modest makeup. Do not come in curlers or with wet hair; no "Gothic" or "wet" look is permitted. Jewelry is minimala simple, single-pair of earrings (one in each ear), a simple necklace, a ring, a watch, a bracelet. The following items are not allowed at any Debutante event or concert: multiple earrings, pierced eyebrows, tongues, or visible body parts other than ears, and tattoos that may be visible to our guests and patrons. A Debutante will be asked to remove inappropriate jewelry in order to participate...

San Bernardino grooming was more lax: I always wore two earrings in each ear, and received not a single reprimand. But it is nice to see the Richardson Symphony Debs have a free pass for nipple piercings.

The two organizations do have similar guidelines for concert etiquette, i.e. that each patron should at all times behave as if clenching a conductor's baton in his or her ass. Again, from the Richardson debs:

We applaud at the conclusion of each piece. We do not applaud between the movements (sections) of a piece---if you are not sure that the piece of over, then just wait. The director will put his baton down at the end of the piece, and he will keep his baton lifted in-between the movements. Simply put: If his arm is up, do not applaud. When in doubt just sit quietly---it is far better to remain quiet than to be embarrassed by applauding at an inappropriate time.

Every time I read this I make noises that would be most inappropriate in a fancy concert hall, so I'll just quote from Alex Ross's excellent article on the subject, which starts. "I hate 'classical music': not the thing but the name. It traps a tenaciously living art in a them park of the past," and eventually gets to:

The rise of classical music mirrored the rise of the commercial middle class, which employed Beethoven as an escalator to the social heights. Concert halls grew quiet and reserved, habits and attire formal. Improvisation was phased out; the score became sacred. Audiences were discouraged from applauding while the music was going onit had been the custom to clap after a good tune or a dazzling soloor between movements. Patrons of the Wagner festival in Bayreuth proved notoriously militant in the suppression of applause. At an early performance of Parsifal, listeners hissed an unmusical vulgarian who yelled out Bravo! after the Flower Maidens scene. The troublemaker had reason to feel embarrassed; he had written the opera. The Wagnerians were taking Wagner more seriously than he took himselfan alarming development.

I never did contact the Inland Empire Symphony Association for the survey, although curiosity about the survey must have been the reason I cut out the deb notice in the first place. I want to think there were questions like, "Have you experienced any decline in the quality of your curtsey since completing the deb program?" But they were probably more like, "Did you marry up, and, if so, how much dough are you prepared to donate to the symphony this year?"

Last week, a little after 12:30 a.m., I heard someone playing a sax out on the street. It sounded close, and when I looked out the window I saw the guy standing right in front of Tula's, which must have been closing for the night.

The guy was good, so I leaned against the windowsill and listened for a while, having one of those blissed out urban moments. I've had a several of those over the last month, and I haven't gotten around to sharing any of them (bad, bad blogger!). And that's when I started composing this entry in my head.

I was busy converting the picture to words and committing the words to memory when I realized I had a digital camera with a fancy night setting: 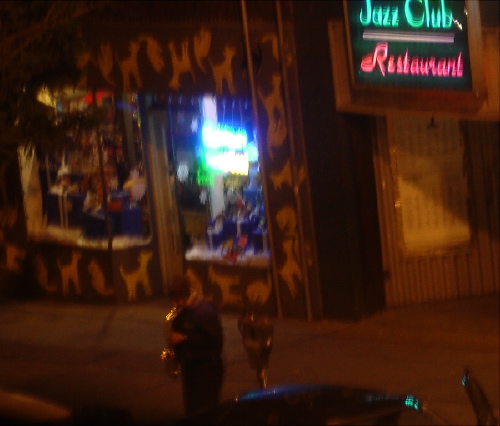 This was without a flash, just an extended exposure. Hence the blurring.