I ordered a pair of these to donate to the Clarion West Scholarship Auction at Potlatch this year: 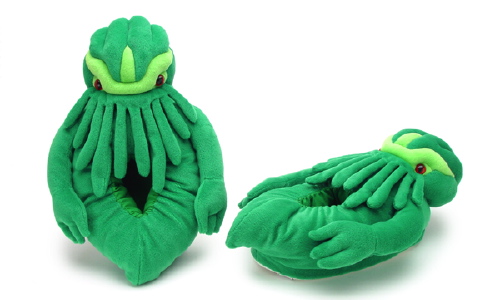 I'm tempted to get a Nyarlathotep plush and set it loose among a Beanie Babies collection.

No, really -- you wouldn't like me when I'm angry. I get inarticulate. I grind my teeth. My skin turns -- okay, not green -- red. My eyes turn red. They swell up. Fluid leaks from them, and also from my nose.

It isn't pretty. But at least the transformation doesn't trash my outfit.

And fortunately it doesn't happen with every kind of angry -- just the kind that's cut with a big, nasty dollop of frustration. Less rage than outrage, I suppose.

Public episodes of the Red Drippies used to concern me more than they do now. I've stopped being embarrassed myself, but I do feel a little guilty when my unseemly display discomfits others. And now I know trying to suppress it just makes it worse. The best I can do is try to keep the anger and frustration under control, because once it hits a certain level, there's no backing out. Physiology takes over. Gamma rays are nothing compared to a supercharged endocrine system.

The pisser is that when I wake up in the morning, I know the tissue around my eyes will still be swollen. Even with a blast of antihistamine in my system, it's gonna take a good 12 hours before everything goes back to normal.